skip to main | skip to sidebar

Have you ever seen AutoCAD drawings where someone has added arcing lines that continue from each other, but they are not tangent? (as in having nice smooth transitions from arc to arc). Placing those nice smooth wiring lines into your electrical plans is very fast and easy! We're going to use the ARC command to place the wires. If you remember, the ARC command and it's default prompting uses the 3 point ARC option. So we start all our wiring lines with a 3 point ARC as shown below:

OK, here's the trick if you haven't done this before... if you press the spacebar or press the ENTER key, it repeats the ARC command, that's no big deal...but if you spacebar or ENTER again, it attaches the second arc to the end of your first arc!, AND the connection is TANGENT, as in a very smooth transition from one arc to the other! Now to draw the second ARC the prompting is different, look at your command prompt now... it asks only for the end point of the second arc, drag the ARC to a point that looks good and pick the end point, you're done with the second ARC. Just repeat as needed by double tapping the spacebar and picking points till you have all the arc lines that you need.

Below is an example of running a curved wiring line from a switch to a fixture.

TIP: Remember to create a seperate layer for the wiring lines, and set a Hidden linetype to the layer. If you draw some arcs and don't see the hidden linetype, check your Ltscale setting. A good typical setting to start with in an architectural drawing is LTscale=24.

After you have placed a switch symbol, start your 3 point arc as shown above. The start point begins on the switch. 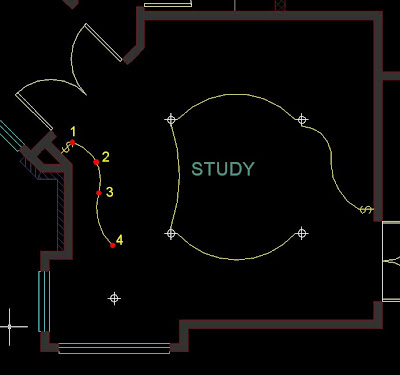 Once you have completed the first ARC, double tap the space and you're right back in the ARC command ready to drag and place the second ARC. As shown above with point #4. 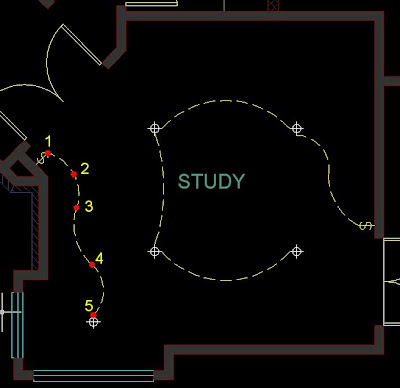 
TIP: If you don't like the way your wiring line looks, start over. Trying to edit the ARCs to make them look good is difficult.

Below is an example of different ways to run wiring lines between fixtures. With a little practice, you can place them perfect the everytime! 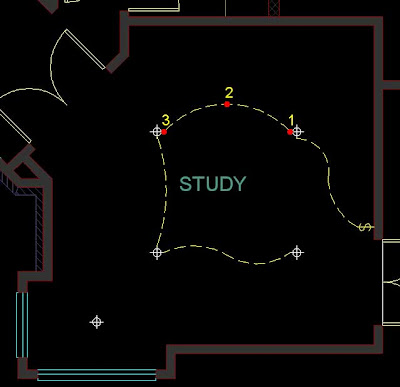 If you need a symbol library of Electrical Blocks, check out my web site address below. Don't spend any time drawing the symbols yourself, it's a massive waste of time!

If you have any questions, or comments about this AutoCAD lesson, send me a note at:

Good luck with all your projects!
~Kevin

Took Some Time Off...

Hello out there!
I took some time off from my blogging to make some life changes this summer. I'm back, and will be posting tips and tricks, lessons, and information about my website: http://www.ArchBlocks.com

Thanks for stopping by!
Kevin
Posted by Kevin at 12:51 PM No comments:

This is a quick and simple tutorial on placing lighting plan symbols in your AutoCAD drawings. If you haven't used the Nearest osnap setting very often, this is a great place to use it. The Nearest osnap setting lets you place a block onto a object with a perfect connection, and you get to pick exactly where you want it to go. Nearest gives you the most flexibility in accruately placing blocks.

First, set the Running Osnap to Nearest, I uncheck all the other settings because they just get in the way. The quickest way to the Osnap settings is from your Status bar at the bottom of your screen. Right-Click on Osnap, then select Settings. 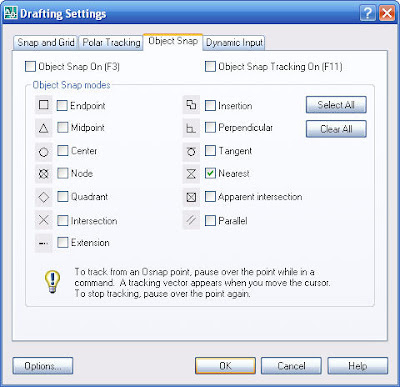 Once you set Nearest as your osnap it will only use that osnap, and it will be on all the time.

Let's say we want to place a single switch next to a door opening into a room. Go and find your switch block to insert. I use Design Center to manage all my blocks. I have a block library specifically for lighting plans.

Here's the URL address for the ArchBlocks.com Electrical Library: 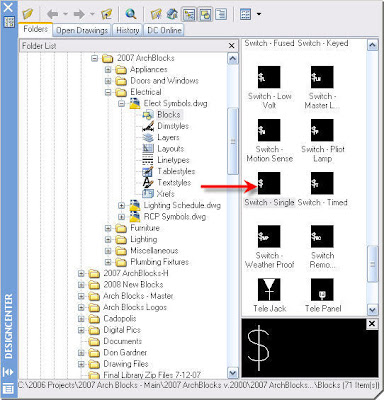 Once you double-click with the left mouse button, you get the Insert dialog box for inserting blocks into AutoCAD. Select OK, and you will then be prompted for two things, insertion point, and rotation. 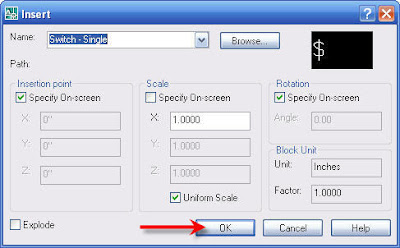 Once you pick OK, you are prompted for the insertion point. Drag your switch symbol to the location on the wall next to the door. As your crosshairs touch the wall line you will see the Nearest osnap marker appear (it is the hourglass figure - see below). You can then drag the symbol up and down the wall line to the location that you want, then pick exactly where you want the symbol to attach to the wall. 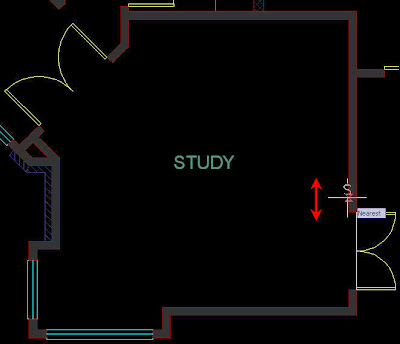 Next, you are prompted for Rotation. This is where Nearest works really well. Just drag your crosshairs along the wall, and pick anywhere (as long as the Nearest marker is showing). When you see your symbol rotated to where you want it, just pick, and the symbol is placed perfectly onto your wall. 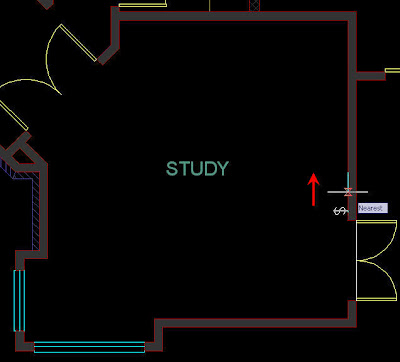 With Design Center, and using the Osnap setting of Nearest, you can quickly, and accurately place your lighting symbols in your drawings.
SPEED TIP: Once you Insert a symbol and rotate it into position, if you need the same symbol with the same rotation in other rooms, it's faster to Copy the symbol into the other rooms, than it is to Insert each new symbol.

Next lesson: drawing those perfect wiring arcs from your switches to the lighting fixtures. 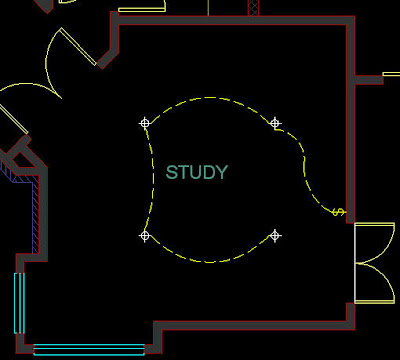 AutoCAD 2009 shipped last week to all the users that are on subcription with Autodesk. I installed mine today and wanted to share the installation experience with you all. I've been installing AutoCAD software for over 20 years now, and you always wonder how easy and trouble free it's really going to be. My installation went very smooth, and took approximately 20 minutes. 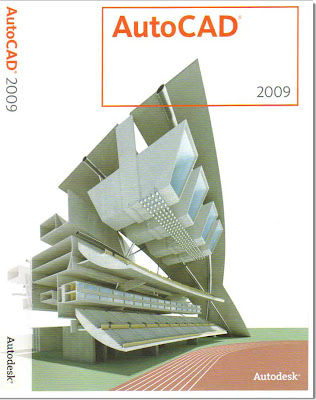 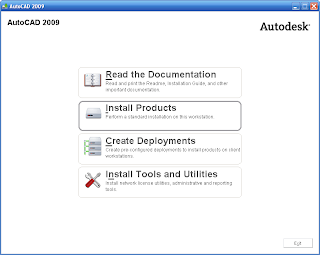 After that, you select what Products you want to install, AutoCAD 2009 was checked on by default. 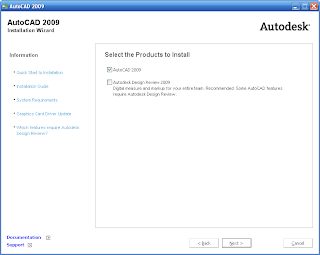 Next you need to Accept the License Agreement. 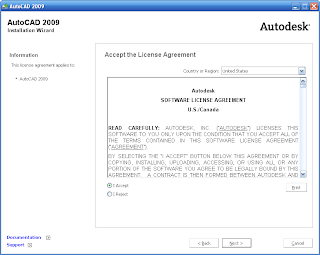 Next you have the option to Review, Configure, or Install. After looking over the default installation settings I noticed that the installing the Materials Library was checked off. So I selected Configure, so I could check it on . 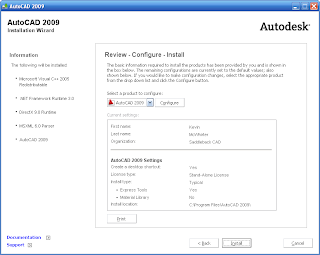 Next you select what license type you want to install, Stand Alone, or Network. 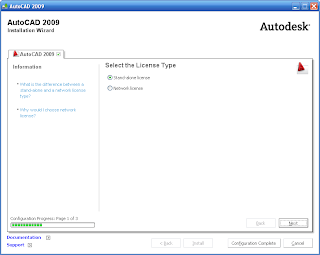 Then you select the Installation Type, Typical is the default. 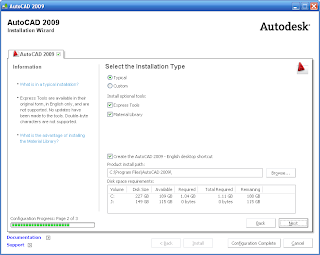 The next dialog states that the Configuration is Complete. 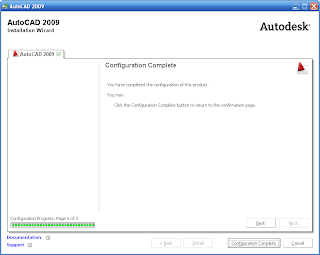 You are almost done! The Installtion Wizard now installs everything. 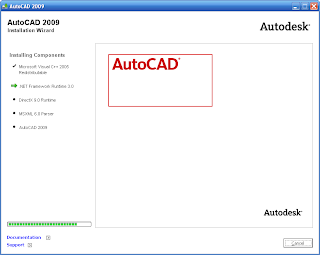 After a few minutes the Installation Complete dialog appears. 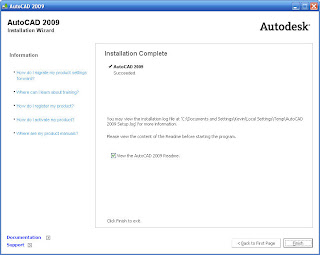 Once you pick Finish, you can choose to Restart your computer now, or later. The installation Wizard places this shortcut on the Desktop.

Doubleclick the shortcut and your new AutoCAD 2009 comes to life. You will be asked if you want to migrate your settings from your older versions of AutoCAD that are on your computer. You are then asked if you would like to register now or later. I decided to register right then and it took less than a minute. 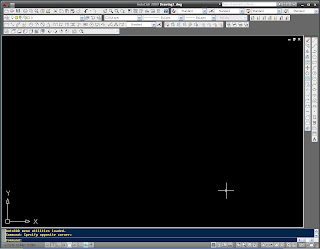 How many of you out there use your AutoCAD for projects at home? Personally, I can't think of any better use for $3,000 software, and a $2,000 computer, than to design a $20 home project!

I love home remodel projects, and I've been a woodworker since I was 10 years old. So I'm starting an addition to my blog that shows how AutoCAD, or any CAD package, can save you time and improve your design projects at home.

The first project that I would like to present is one of the simplest ones I've done lately. I found two old outdoor chairs at a demolishion site in Oceanside California. I wanted to update the look and give them a new paint color. My first step was to decide what design I wanted to give the back and arms. I felt something similar to a loose interpetation of a adirondack chair would work fine. So I drew up a few options in AutoCAD as shown below. 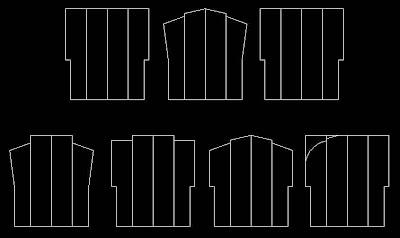 I decided that I wanted the beveled back option. Drawing options in CAD is a great way to see different options and get cutting dimensions. 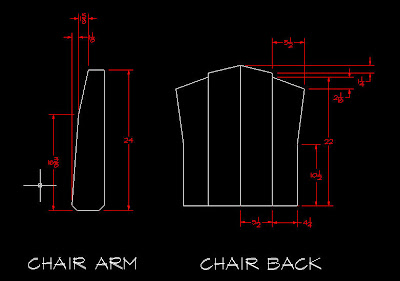 So here is the final result. The picture below shows one chair completed and one chair as I found them. 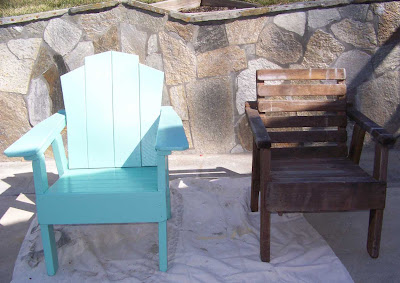 
I will add my Weekend CAD Warrior column to my blog a couple times a month, so stay tuned for the next CAD home project.

That's right! AutoCAD 2009 will be shipping soon. To see a couple of the features reviewed go to Donnie Gladfelter's "The CAD Geek Blog", at the URL address below:

To see a complete list of the new features go Shaan Hurley's "Between the Lines" blog. You can also download the AutoCAD 2009 Preview Guide from his blog. His URL is:

One of the new features I really like is the new "Ribbon" menu GUI. This is similar to the Dashboard menu in 2008 and 2007. There's great flexibility and customization in a very intuitive menu interface.

AutoCAD Tip of the Week

If you use Paperspace in AutoCAD, there is a feature that has been available for the last few releases that is a big time saver! I use this feature all the time to Lock and Unlock Paperspace viewports. It is also a great way to change the scale factor of your viewports very quickly.

In the lower section of your screen menu at the very bottom you will find the Status bar. Typically, you use it to set your Ortho, Polar, and Osnap settings, etc. If you look a little further to the right there is a little Lock icon.

If you pick on this lock while you are in Paperspace viewport, it will Lock and Unlock the viewport view so you can zoom and pan around. This feature is so much faster than having to right-click the viewport border and then select Display Locked on the right-click menu.
Just to the right of the Lock icon is popdown menu that lets you select any scale factor you would like to set in the viewport. If you're a veteran of the earlier versions of AutoCAD, you will remember that you had to know and type in the zoom scale factor such as 1/48xp. That would give you a 1/4"=1'-0" scaled viewport. Is that old technique nuts, or what?!
So now you set your viewport scale and lock and unlock your viewports very quickly. Simple time saving features like this make upgrading your AutoCAD well with the money.
Have a great day! Kevin
Posted by Kevin at 12:29 PM 1 comment:

The E-Commerce section features new, and innovative businesses that offer products over the internet.

This was an exciting event for my new website http://www.archblocks.com/ that offers upscale libraries to CAD designers.

Please stay tuned to this blog for tips and tricks, AutoCAD tutorials, and industry news.

Welcome!
Thank you for stopping by. This is my first post for the exciting year of 2008. Please stay tuned to this blog in the coming year. I will be posting each month tips and tricks, tutorials, and industry news, and great links that I hope everyone will find informative.

I want this blog to be a great resource for new and experienced AutoCAD users.
Posted by Kevin at 11:38 PM No comments:

This blog is powered by espresso!

Promote Your Page Too